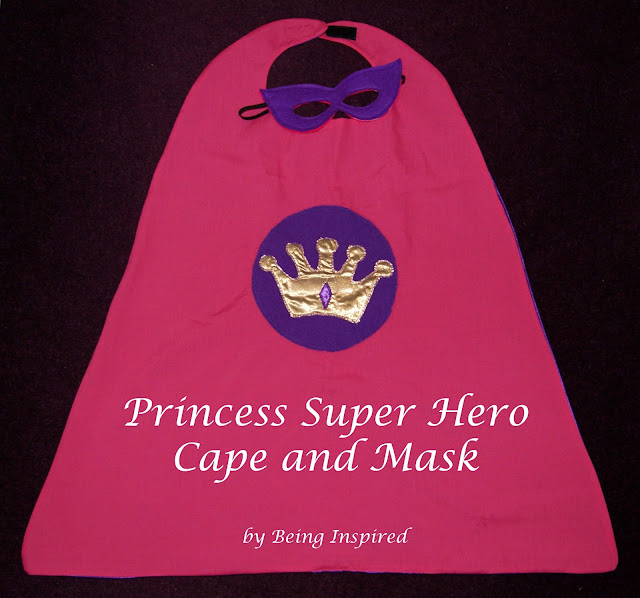 I'm trying to make as many of my Christmas presents as possible this year but I can't share many of them yet as their recipients might see them! But I'm pretty sure the little girl who's getting this Princess Super Hero Cape doesn't read my blog. :) So I thought I'd share some pictures of it.

There are loads of great tutorials for making capes so I'm not going to do a full tutorial but these are the blogs that inspired mine: I used the patterns from Serving Pink Lemonade for the top of the cape and the princess crown and Living Locurto for the eye mask. And I got the dimensions for my cape from How Does She. 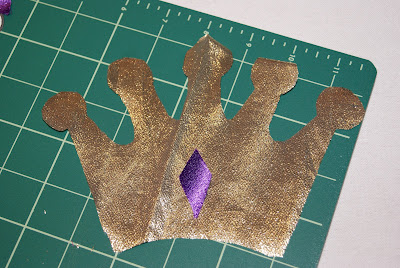 Once you've cut out your pieces sew your logo onto the center. My cape is purple on one side with a SuperGirl T logo (the little princess' name begins with T) and pink with a princess crown on the other side. I had found gorgeous gold fabric to use but it frays really easily so in retrospect it wasn't the best choice. I ended up using a zig-zag stitch around the outside so hopefully that'll keep it secure but use felt if you can, much less hassle! 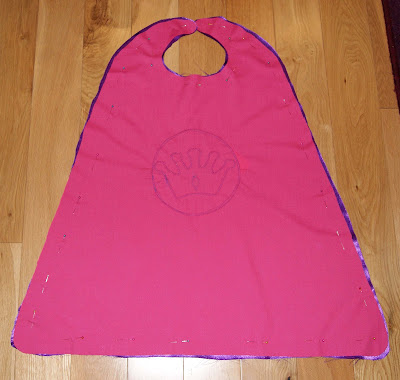 Then just pin the pieces right sides together and sew around the outside. Don't forget to leave a gap so you can turn it. 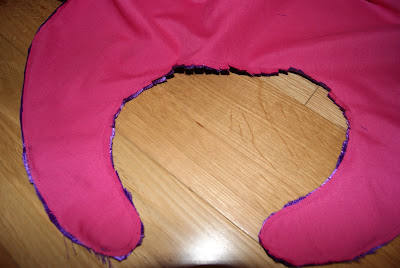 It's a good idea to cut into the excess around the collar so it doesn't pucker so much. Then just turn it the right way out, press it and sew up the gap using a ladder stitch. 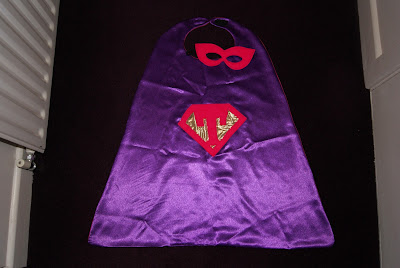 This is purple side of the cape (which needs to be ironed!). I also made a Princess Super Hero mask to match, pink on one side and purple on the other. You could also make super hero cuffs but this costume is more Princess than Super Hero so I might add a crown or wand, we'll see! 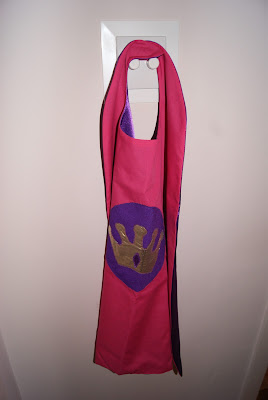 I'll make sure to update this after Christmas with pictures of it in action but until then this little cape is just hanging out, waiting to be worn!

Things I've Learnt:
- It was a little tricky working out what size to make it as I can't measure the little princess! But I'm hoping it'll be okay and I put a large piece of velcro on the neck so it'll be easy to adjust it.
- You could attach the velcro before sewing the two pieces together but it felt it would be a bit more secure to do it afterwards, just use co ordinating thread to keep it looking pretty!
- I had a huge disaster when I was cutting out the purple fabric. I had it folded in half and traced the template for the collar on the wrong side!! So when I opened it out the collar pieces went the wrong way! :( I tried to patchwork fix it but ended up buying more fabric, it is a Christmas present after all! But just make sure you double check before you cut!!
- You obviously could make this in black and red for a Batman and Superman cape if Princesses aren't your thing. :) Next time I have some free time I'm going to make a set for my classroom role-play area!

Oh and be sure to enter my Giveaway to win two cute sock monkeys and lots of teaching resources!

Linked up to: Creative Itch, Earning my Cape, The DIY Dreamer, Hey Mommy, Chocolate Milk, Ladybug Blessings, Sugar and Dots, Reading Confetti, Michelle's Tasty Creations, The Crafty Blog Stalker, Diana Rambles, Ladybird Ln, It's a HodgePodge Life, Blissful and Domestic, My Life's a Treasure, Sew Can Do, Be Colorful
Posted by Being Inspired at 02:02