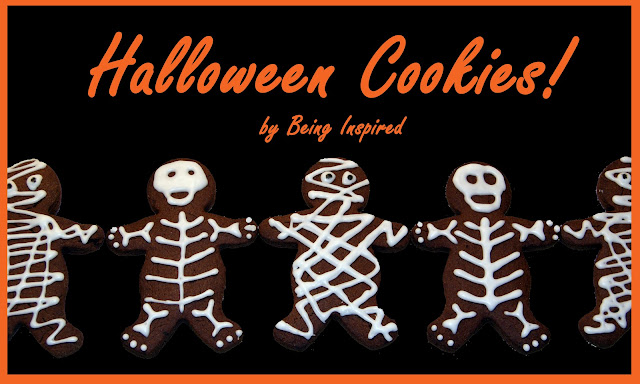 So blog-land is filled with all things Halloween at the moment. And being an Irish girl I figure it's my duty to join in on the fun. Hallowe'en is originally Irish after all.

Surprised to hear that? Well I don't blame you. Most people automatically associate Halloween with America. And to be honest I don't think we do near enough in Ireland to embrace Halloween.  But it's still kinda a big deal here. Supposedly it derives from the Celtic festival of Samhain. This was a celebration of the beginning of winter and the darker half of the year. And it does get dark. :( We're talking 4pm dark. But you can't expect those poor souls to go a roaming if it's bright outside!

I grew up dressing in black sacks with coal smeared on my face (a witch) or with an old sheet thrown over me (a ghost) and heading out trick or treating. My neighbours were pretty keen on the  trick part which they led me to believe meant that I had to do a trick to impress them (say a poem or tell a joke) before I was given any peanuts or apples or sometimes Wagon Wheels if we were lucky! Then we'd come home and play some Halloween games, like bobbing for apples.

Oh and the best bit? Dinner! We'd always have Colcannon. There may be a blog post in this on its own actually. Let me know if you'd like the recipe! It's basically mashed potato mixed with cabbage or kale but like all my favourite foods there's a surprise inside. You wrap coins up in baking paper and hide them in it! We used to get so excited searching for money and competing to see who had the most.

Oh and then after dinner we'd have Barm Brack. It's a kind of bread with sultanas and raisins in it but hidden somewhere inside there's a ring! Now ours tended to be a cheap plastic ring but it was still pretty exciting. I didn't even like the bread as a kid but I'd eat it just to try to win the ring. :) Traditionally I think the barm brack was used for fortune telling. They used to put a coin and a piece of cloth and a few other things in with the ring and each had a meaning. If your piece had the coin in it then that signified good luck or wealth in the coming year.

Anyway, you're not here for my reminiscing! You want to make cute little skeleton and mummy chocolate cookies, right? :) I was going to make these as gingerbread men but something about that just seemed too Christmassy. Plus I was making them for my sister and I wasn't sure if she liked ginger. But I knew she liked chocolate! :) I found the recipe and idea over at Our Best Bites. Check it out for some even cuter little skeletons!

Cream together butter and sugar until light and fluffy. Beat in the egg and vanilla essence until well combined.

Mix flour, cocoa powder and cinnamon together. Slowly add to the butter/sugar mixture, stirring first and then beating until well combined.

Wrap the dough in cling film and place in the fridge for 30 minutes (or the freezer for 5/10). Lightly dust your work surface with a mixture of cocoa powder and flour. Roll out the dough to about ¼ - ½ inch thickness.

Use your favourite gingerbread man cutter to cut out your little men and place them on your baking sheet.

Bake in the oven for 8-10 minutes. Leave to cool for a few minutes and then transfer to a wire rack. 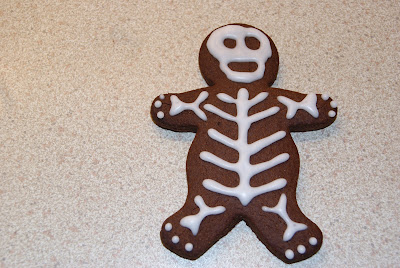 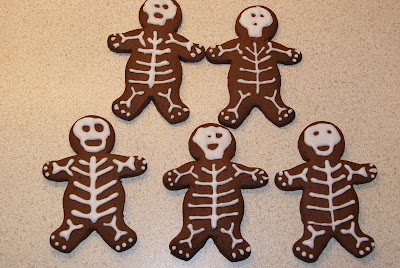 Then get decorating! I just used icing sugar mixed with a bit of water for the icing. Then use a piping bag to draw on his bones. For his face draw the outline, eyes and mouth and then fill in the rest. 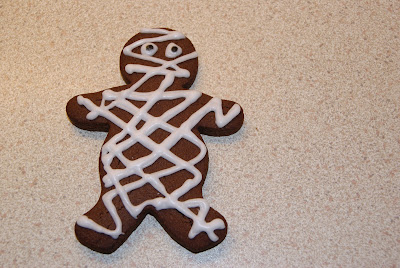 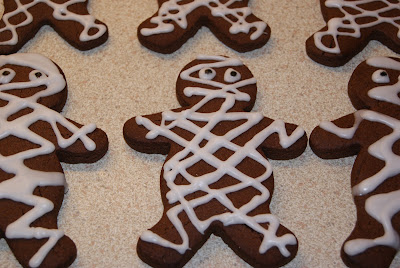 I wish I'd used a thicker nozzle for the mummies. But they're pretty forgiving. Just drizzle it over any old way. And don't forget to give him some eyes! 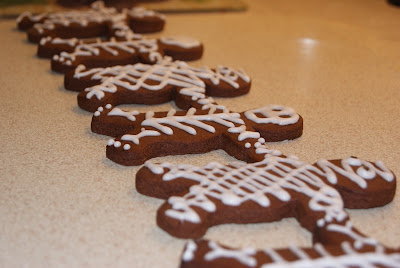 Things I've Learnt:
-  It's kinda tricky to tell if they're done cos they don't change colour but the dough will look less wet. 8 minutes was plenty for my little guys.
- If you get a bit excited transferring them to the wire rack you may accidentally break their heads off... But that's just scarier right?
- Doing the icing takes forever!! Give yourself plenty of time. :) The skeleton icing was actually much easier than the mummies! But that's just cos I'm an idiot and couldn't figure out what it should look like.
- I kinda wish I'd made ghosts too. They'd be so easy - just cover his body in white icing and give him little black eyes.
- Oh and I just bought a black icing pen. Too much fun! I just need to think of more uses for it than mummy eyes...
- Check out my grape Halloween costume for more Halloween-y fun! :) 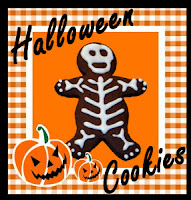 If you want an easier option I love these cute cookie cutters!! They do all the hard work for you! :)