Pin It
Bored of your usual lunches? Fed up trying to convince your kids that fruit is delicious? Try making these Sesame Street Snacks! They're super easy to make and taste amazing! 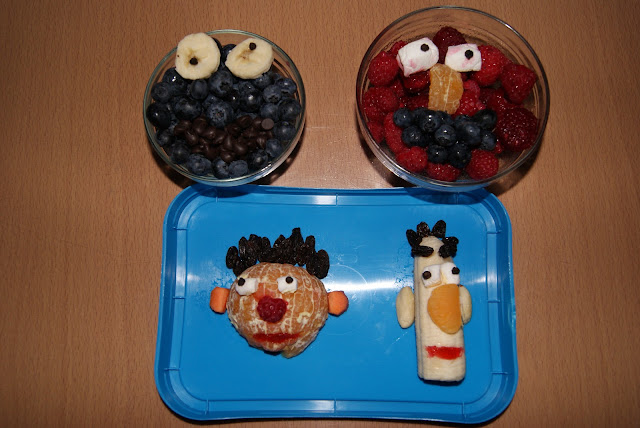 First up we have the Cookie Monster - he's just a bowl of blueberries, plain chocolate chips for the mouth and bananas for his eyes!
Next is Elmo. He's made of a bowl of raspberries, marshmallow eyes, orange nose and blueberries for his mouth. He'd probably look better if there were more raspberries in the bowl but it's dark outside so I wasn't going out to pick more!


For some reason Blogger refuses to let me put Ernie in the right way around. So you'll have to tilt your head, sorry! He's made from a mandarin orange, raisins for his hair, marshmallow eyes, a raspberry nose, carrot ears and glacé cherry for his mouth!

And finally - Bert! He's made from a banana, raisins for his hair and eye brows, marshmallows for his eyes, orange for his nose, peanut ears and glacé cherries for his mouth.

Things I've learnt:
- You know that whole "Don't play with your food!" thing? Don't listen to them! It's way too much fun. :)
- Raspberry juice gets everywhere, hence Elmo's bloodshot eyes!

Linked up to Making the World Cuter, Marvelously Messy, Be Colorful, Today's Creative, Addicted to Recipes, Sew Can Do, Foodie Friends Friday
Posted by Being Inspired at 05:27

Email ThisBlogThis!Share to TwitterShare to FacebookShare to Pinterest
Labels: recipes