Pin It
There's been a bit of a lack of baking round here lately so last night I decided to fix that by making the most delicious decadent cupcakes! White Chocolate Truffle cupcakes - sound amazing right? :) I've adapted this from a recipe I found at The Pampered Chef. 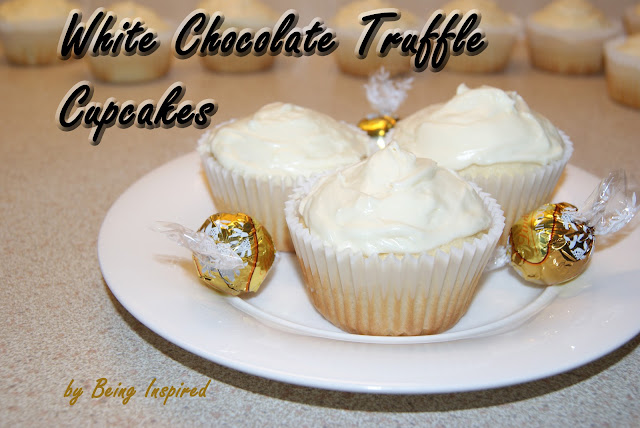 And even better - the truffles are hidden inside the cupcakes! And you all know how much I love hiding stuff in cupcakes! (Like these Brownies Cupcakes with strawberries hidden inside and Inside-Out Carrot Cake Muffins). 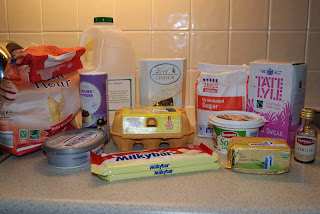 Preheat your oven to 160°C (325°F). Place muffin cases into your muffin tin. (I still think these are cupcakes and not muffins though!)

Add flour and baking powder to a bowl and stir together.


Combine milk and vanilla essence in a glass/small jug.

Separate your egg whites from the yolks.

Add egg whites to a bowl and beat until stiff peaks form.

Beat butter and sugar together in a large mixing bowl until fluffy.

Fold in egg whites and stir until smooth.

Divide the mixture evenly between the muffin cases.

Unwrap your white chocolate truffles. Try not to eat them all. :) 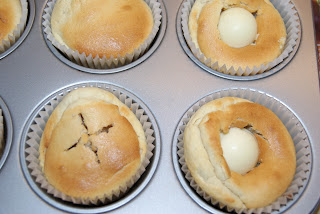 Now the fun part! As soon as you take them out of the oven snip an X in the top of each cupcake. Press one truffle into each one! Leave them in the muffin tin while you do this. The truffle's will melt into the cupcake. mmm :) 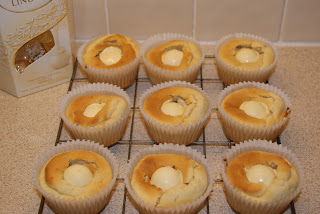 Then place them on a wire rack to cool.

Now for the icing - melt the white chocolate. Put a bowl over a saucepan of hot water on a medium heat. Place the white chocolate in the bowl and slowly melt, stirring all the time. (Nothing worse than burnt chocolate so take your time and don't microwave it!!)

Let the chocolate cool (pour ice cold water into the saucepan and place the bowl into it to speed this up). Then add cream cheese, butter and vanilla essence. Beat until well combined.

Slowly add the icing sugar and stir. Then beat until smooth. Then ice up your cupcakes! :) 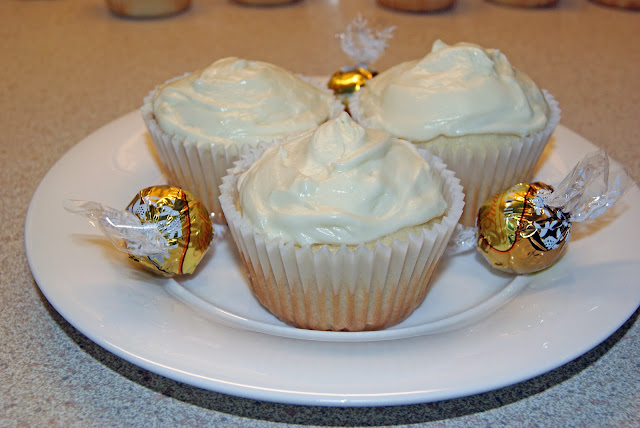 Things I've learnt:
- This recipes uses a lot of bowls! Keep your main big mixing bowl for the butter as that's what you'll be adding everything else into. I used mine for the flour and had to transfer it to yet another bowl! (I love baking but hate washing up after so anything to avoid using unnecessary bowls!!)
- The recipe says to put the truffles in as soon as you take the cupcakes out of the oven but I think I'd leave them a few minutes first in future. That way the truffle would melt but not completely like mine did.
- There's a reason why the truffles are to be put in while the cupcakes are still in the tin though. I took one out to see if I could get it in better (as in without just shoving it in!) and the sides of it cracked! :(
- This makes a lot of icing. I'm not a huge fan of excessive icing on cupcakes so I'd say half the amount would have done me. As it is I went overboard icing them and still have a little bag of icing in the freezer for another day. Can you even freeze icing? Well we'll see! :)
- I think I'd try milk or dark chocolate truffles next time too. Just to add some colour!
- I love this website - Traditional Oven - for converting measures of ingredients.

Linked up to Foodie Friends Friday, Thirty Handmade Days, Addicted to Recipes, Carole's Chatter
Posted by Being Inspired at 21:08